Perseus, son of the mortal Danae and the god Zeus, became famous for his role in defeating various ancient monsters. We’ve talked about several of them the past few weeks. He bested the Graeae, retrieving what he needed from them, beheaded the Gorgon Medusa, and saved the lovely Andromeda from the sea monster Cetus.

The Greeks have painted a superman like picture of Perseus, but he didn’t do it all on his own. Like James Bond, he had help from his nifty gods-gifted-gadgets. We’ll get to that in a minute.

What put Perseus on this glorified path?

As the son of Danae, Perseus was the grandson of king Acrisius. According to myth, an Oracle told Acrisius that he would be killed by Danae’s son. Fearful, Acrisius locked his daughter away in a bronze tower with no doors and only one small window. This was his way of insuring she would never marry and never have children. It didn’t work.

Danae remained isolated, sad and lonely, in that tower until one night she was visited by a man that came through the window in a stream of golden shower. In his hand he held a lightning bolt. No fortified tower could keep Zeus out. He turned her prison into fields of beauty and in return she bore him a son—Perseus. When her father, Acrisius, found out he was furious and had Danae and Perseus vanished. Locked up in a coffin-type box they were put out to sea.

Zeus made sure they were safely delivered to the island of Seriphos. There they lived a good life. A quiet life by the sea in a fisherman’s village. Except, the overseeing king Polydectes  wanted to marry Danae and she did not return the feelings. The king saw Perseus as a  problem standing in the way. So he worked on a plan to force the marriage and remove Perseus from the picture. Faking a wedding to another woman he sent Perseus on an impossible mission in place of a royal wedding gift—the Gorgon Medusa’s head.

Polydectes expected Perseus to fail. He didn’t count on Perseus’s demigod status, or him receiving help form the gods, themselves.

By tricking the Graeae, Perseus secured the location to the Hesperides, nymphs tending Hera’s orchard, from whom he gathered the weapons needed to succeed in his task:

Perseus and the monsters 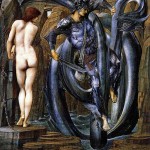 Armed with his James Bond gadgets, Perseus approached the Gorgon—not straight on—but while she slept. He saw all the stone statues of men in her den and did not want to turn out the same. He used the reflection in the shield by which to see her and beheaded her before she woke. He then secured her head safely in the knapsack. The Gorgon’s sisters woke and attacked, but Perseus escaped, using Hermes winged sandals. He went on to rescue Andromeda, as you read last week.

The circle is completed…

The prophecy would come full circle when Perseus and his new, soon-to-be-bride leave for Seriphus, stopping at Larisa along the way. Perseus wanted to compete in some of the games taking place at the time and he participated in the discus throw. However, when Perseus threw his discus, it hit a man in the crowd and the man instantly died. That man was Acrisius, his grandfather. The Oracles words had come true.

What is the lesson here? In trying to out-run / out-smart your destiny you may actually create it? What else can be learned for this story?

* This is the fourth of several Immortal Monday posts surrounding the life of Perseus. Also read: The Graeae Sisters, The Gorgon Medusa, and The Colossal Cetus.