The mighty beast known as the Cetus plays a huge role in the story of Perseus we’ve been dancing around this month, but by no means is exclusive to the myth.

Not exactly what you think of after watching Clash of the Titans, is it?

Yeah well, you have to admit the Hollywood rendition looks a lot cooler on film.

Perseus and the Cetus 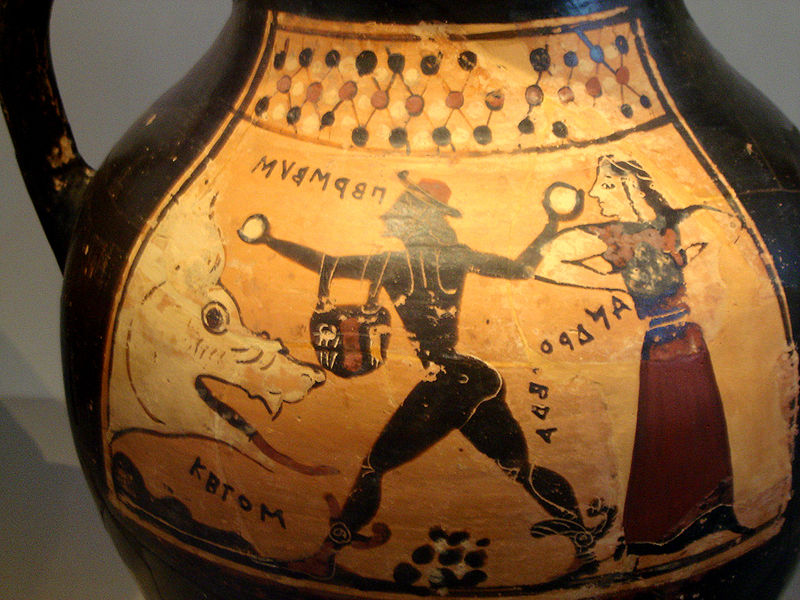 This story has been heard by many, thanks to movie magic. The beautiful and arrogant Queen Cassiopeia, in her vanity, boasted that her daughter Andromeda was more beautiful than the Nereids―female spirits of the sea.

Angered by her claim, Poseidon sent the sea monster Cetus to attack and destroy their home city Aethiopia. After consulting an oracle, and with no other recourse, it was decided that Andromeda had to be sacrificed to the Cetus. She was chained to the rocks near the ocean where the Cetus could devour her without harming the city.

It was here Perseus happened upon the lovely Andromeda, upon his return home. Immediately taken with her beauty. He requested her as his reward should be save her from the beast. Her parents consented.

Here is where the story blurs. One account has Perseus slay the Cetus with his sword to the sea monster’s back. Another has Perseus use the head of Medusa. Hmm. Which option would you go for if you were Perseus and going up against a foe ten, twenty, fifty times your size? 😉

Hercules and the Cetus

A similar story is seen when King Laomedon of Troy refused to pay Poseidon for the building of the city walls. Poseidon responded by sending the great sea monster Cetus upon Troy. To avoid the destruction of the city, an oracle declared the king’s daughter, Hesione, had to be offered to the beast as a sacrifice. Like Andromeda, she was chained to the rocks, and like Andromeda, she was rescued. Hercules saved the princess and finished the beast.

The mention of monsters is not exclusive to mythology. As you may well know, there are plenty of creatures mentioned in the Bible. In Jonah 2:1 (1:17 in the English translation) the text reads dag gadoi (in the Hebrew version). That translates into ‘great fish,’ or ‘huge fish,’ when translated into Greek. Cetus means huge fish―a term closely associated with sea monsters. So one may argue that Jonah spent three nights in the belly of a sea monster (whale via the traditional story).

Jonah 1:17 Now the Lord had prepared a great fish to swallow Jonah. And Jonah was in the belly of the fish three days and three nights.

It is not uncommon to see Cetus scrolled across the bow of a ship. It was a way of announcing the crew did not fear the sea and what dwelled within. Because many sailors associated Cetus with great storms, misfortune, and the loss of cargo and lives, the Cetus name has often denoted vicious pirate ships wanting to strike fear in others.

Now it’s your turn to be the judge. What do you think, whale? Giant squid (as seen in Pirates of the Caribbean)? Ancient sea monster? Fable and nothing more? Something altogether different?

* This is the third of several Immortal Monday posts surrounding the life of Perseus. To catch up, check out: The Graeae Sisters and The Gorgon Medusa.