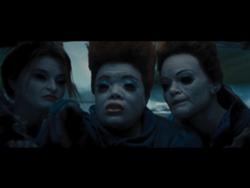 The Gray Sisters driving a taxicab.

Hollywood’s interpretation of the ancient myth, the Graeae, tossed into modern-day, while at the same time, keeping them tied to their Greek heritage. Have you see the latest Percy Jackson movie? If so, then you know what I’m talking about.

There are flaws with their depiction, to say the least, but it’s a movie, meant to be enjoyed, and I’m not here to criticize.

The Graeae Sisters of mythology, the version we usually consider, were reported as hating men and wanting nothing to do with them. You know the type, crotchety old hags. This particular trinity was born the part, with long gray hair and sharing one eye and one tooth between them. They are often depicted as old crones.

When we hear Graeae we think gray…

Yep. That’s more like it. Or even cartoon gray.

Now that’s fun. It’s that shared eye, you see there, that ended up being their weakness and allowed Perseus to get the upper hand when dealing with them. For only they could tell Perseus where to find the last objects he needed in his quest to finish Medusa. Object sent to him by the gods (We’ll touch on that in the weeks to come). But for today’s post, let’s just say, he needed leverage to make them chatty.

Their status as daughters of the great sea deities Phorcys and Ceto, sisters to Ladon the Drakon Hesperios, and to the Gorgons (we’ll discuss them next week), placed the Graeae among the Phorcydes―the children of Phorcys and Ceto. The listing of these children appears to be fairly consistent across multiple sources. All Phorcys are either earth or sea based.

I feel like making an elemental crack here, but I’ll refrain. 🙂

It is said that the sisters are actually a personification of the sea―their coloring in dress and hair representing the white foam seen on the waves.

We’ve talked about other trios in the past. The Moirai, Spinners of Destiny, was an interesting post. Another that we have yet to touch is the Norms of Norse mythology. Do you have a favorite trinity you’d like to share? Maybe a favorite characterization of the Graeae?

* This is the first of several Immortal Monday posts surrounding the life of Perseus.