Why do carnivals and circuses lend themselves so easily to the dark side of our imagination? Is it because freak shows are so commonly associated with the institutions? Does the thought of things abnormal make you uncomfortable?

*I realize today is the first Monday in October and we are due for an Immortal Monday, but I am on tap to promote for Pen & Muse today so IM is rescheduled for next Monday. Please return on the 13th when we discuss Hyperion.*

You may recall we talked about the coming of the Dark Carnival Anthology last Monday. Need a refresher? You can find it here. They say timing is everything, and what brilliance enabled this anthology to launch at the same time as American Horror Story’s Freak Show? Did the ladies at Pen & Muse plan this or is it a happy coincidence? Either way, it’s brilliant! 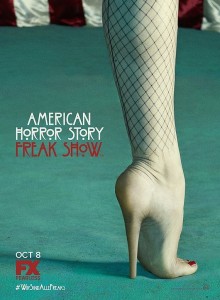 “How?” you might ask. If you are drawn to the creep factor of the carnival or circus, then the freak show is where it’s at. When American Horror Story: Freak Show leaves the watcher wanting more what will they do? Go looking for something to fill the void. This is the perfect solution.

Freak show material makes for the ideal creep filled story. Getting their start in the late 16th century in France, freak shows really took off in popularity when they came to America. Although people’s options of freak shows began to change in the 19th century, they still continue today.

Freak shows are only one of several types of sides shows found in carnivals, circuses, and fairs. Ready for today’s carny education?

Freak show – A show of biological rarities, people with extraordinary diseases or conditions, and performances expected to shock. Examples: Uncommonly tall, short, fat, boney (human skeleton), men and women. People heavily pierced or tattooed. Fire-eaters or sword-swallowers. Deformities of all kinds—that could be a post all of its own.

Geek show – Found in traveling circuses and carnivals, there was a bit of a stigma around the geek show, and it was often a matter a pride for an establishment to be able to say they did not have one. The main performer was usually a drug addict or alcoholic and was paid in like. They performed unthinkable tasks – i.e. bite the head off a chicken. This was performed as a precursor to the bigger act.

Girl show –Primarily an all-girl show. It could be anything from a Broadway act where everyone was dressed to the hilt in feathers, glitz, and  glam, to a “kootch” show where the ladies performed partly clothed or nude.

Museum show – Show centering on exhibits which aren’t usually alive, although it may sometimes feature unusual animals in cages or tanks of piranhas. You might also see stuffed freak animals, or items such as weapons or vehicles made famous through murder.

Single-O attraction is a museum show attraction that is good enough to stand on its own. A great example would be the “Death Car” of Bonnie and Clyde or Hitler’s staff car. Another famous one is the Fiji Mermaid.

“Ten-in-One” – A special deal where you got ten acts under one tent for one admission price. This could be a combination of working acts (magic acts, stunt shows, and such with an exhibition of human oddities, or freaks).

*Remember the post we had on carny lingo? Here’s a bonus. A “ten-in-one” usually ended in a “blowoff” or “ding,” that extra show that wasn’t included in the price of entry. Once they got you hooked, would you leave without seeing the grand finale? Mean, wasn’t it? Maybe there was a reason for this. Maybe it was considered too much for women and children to handle. Something like the classic pickled punks – deformed human fetuses preserved in jars of formaldehyde. *shivers*

Okay…so…enough schooling for one day. Are you ready for a story tease for the Dark Carnival Anthology?

You know you SOOO are!

Here we go—gliding into the Tunnel of Love. 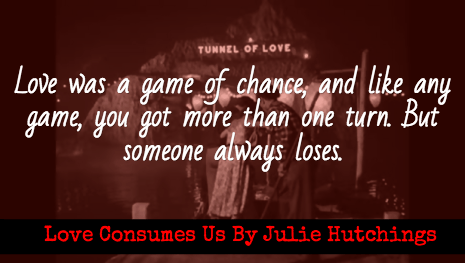 And the Tunnel of Love loomed ahead of us.

I didn’t think they even made those things anymore. I hadn’t seen one at one of these fairs—well, my whole life. It was something you’d only see in a fifties movie, or some old black and white photo. And like anything classy, none of the loudmouth teenagers that frequented the fair were anywhere near it. The shadows around the Tunnel of Love were empty.

I wrapped my arms around her and headed towards the dark entryway.

The tunnel seemed even more like it was dropped out of another time as we got closer to it. Two giant cutout swans with chipping white paint formed a heart with their great necks, creating a doorway into the darkness where love was supposed to flourish. If not for the dark that invited one like me in, I would have seen the marred paint and carved in hearts with random initials on the pristine white of their feathers to be a bad sign, of something lost and something ruined.

I should have looked deeper.

~Love Consumes Us by Julie Hutchings

Add it to your Goodreads.

Travel with the carnival and follow the brilliant blitz!
10/1

Do you enjoy learning about the carnival? Is there anything you think to add that wasn’t covered above? The thrills and chills of the season are upon us. Do you have any books, movies, or the like to share? We’d love to hear it.

Have you liked us? Subscribe to our monthly letter or follow this blog yet? Why not? You don’t know what you’re missing.