A Bird named Enza and the Influenza

When I was young I had a horrible time with history. Hated it. Where did this stem from? I never had a very good teacher when it came to the subject. In high school I had a teacher that I think tried to make class time fun. The problem was he wasn’t making the subject fun, just making a spectacle of himself. It tainted the subject for me. In college I was delighted to find a change. Blessed for the first time with an instructor that didn’t dictate facts from a book, but sprinkled interest in what we were learning, he created real people for me to consider and the challenges they faced became much more meaningful. 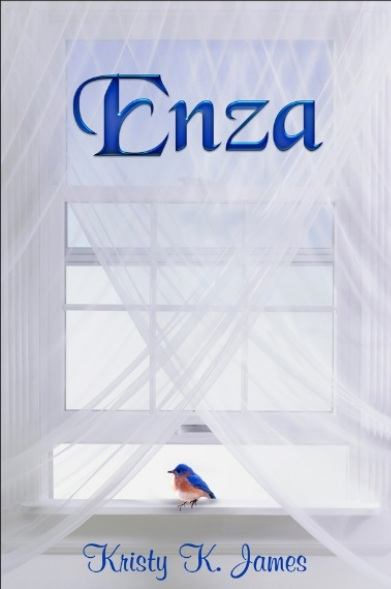 Today’s one of those interesting, lucky days when we get to touch on history and the people who lived it – in a fictional world, through author Kristy K. James. Her new book, Enza is a beautiful journey into the lives of the people who had to endure the influenza epidemic. It will touch you, the characters will move you and it’s impossible not to get invested.

Please welcome Kristy K. James to the blog to discuss her journey is this amazing tale.

Welcome Kristy, can you tell us about Enza. Why did you write it?

When PBS aired a documentary about the 1918/1919 influenza pandemic, I was fascinated. I mean this was a major event in world history…and I’d never heard of it before. A pandemic that wiped out tens of millions of people around the globe and it didn’t warrant so much as a mention in any of my history classes? At some point during the program I realized that this would be a great subject for a story. And slowly, over the next couple of years, the Owens’ family, Colby Thornton and the rest of the characters came to life.

I didn’t have a computer, or access to the internet at that point, so it took awhile to research the time period. Hours spent going through the archives at libraries netted a great deal of information about World War 1, except the story wasn’t going to be about the war. So learning about the lifestyle of the people back then was very time-consuming.

But eventually it all came together and Enza was born. It’s a story told from five perspectives: shoe store owner Elliot Owens and his ten-year old son, Jonathon (who is trying to prove that their German neighbor is a spy); Colby Thornton, an unhappily married minister; Marcus McClelland, local funeral director; and Daniel Pullman, a young man unable to join the army because of an injury. Readers will get to know (and hopefully love) all of these characters in the first half of the book. In the last half they will discover how each of them handles one of the worst tragedies in the history of the world.

Wow. That’s some serious dedication. Old school right there. So, how did you come up with the title?

During the documentary you could hear young girls chanting a little ditty in the background sometimes. I guess they made it up to sing while they jumped rope. It was very eerie. ‘I had a little bird, and its name was Enza. I opened the window and in-flew-Enza.’ The moment I heard it I got chills…and knew what the title would be.

That is eerie. I’ve never heard of it. Okay, who is your favorite character in your books?

Oh that’s a tough question. It’s a toss up between Elliot Owens and Colby Thornton. But if I had to choose, it would have to be Elliot. He’s such a devoted family man, and I just love his sense of humor.

Humor is a wonderful thing. Love that about my man. 😉 What did you enjoy most about writing this book?

Everything. Okay, that’s a little too general. Narrowing it down, I think I enjoyed the research the most. I wound up getting copies of many newspapers from that time. And I paid a visit to an antique book store, purchasing an original copy of the 1918 Farmer’s Almanac and a woman’s magazine from that same year. They have become some of my most prized possessions. It just makes you feel good to read about such an innocent time in our history.

So you’re just a little book hound. 🙂 Love digging your nose into the details and figuring them out. That’s cool. Tell us about a book that resonated with you (either recently or prior to your writing career)?

When my little sister was in high school, she read an old book she thought I would enjoy. It’s called Alas, Babylon (Pat Frank). The story is about a small community in Florida, and how the people survived following a nuclear war. I had read-and hated-another story about the same subject…On the Beach. It left me feeling depressed and hopeless by the time I got to the last page. Alas, Babylon was different. It’s scary to think that something like that could really happen, but I think it was a realistic depiction of how decent, motivated people could not only survive something that devastating, but thrive. They didn’t give up. It’s a great message and I read the book every couple of years. When I wore out the first copy, I was relieved to find that it was available in POD.

I may have to check that one out. Alright, spill. Who is the one person that has single handedly inspired you the most in your life?

I would have to say my maternal grandfather. I’ve never known anyone in my life who made me feel like I was an important person the way he did. Of course he made everyone feel that way. But when you were there, he was just so happy to see you, giving you his undivided attention. He really loved his family and loved making time for them. He also liked to feed us. I think he thought that was his mission in life.

That’s beautiful, Kristy! Sounds like he was a wonderful man. What is your favorite historical period and why?

I think I would have to choose the 1950s. I know, it’s not what most people would consider ‘historical,’ but I don’t care. The music was good, they had a lot of modern conveniences. And morals were still firmly in place.

No, that’s a good choice for those reasons. Not too stuffy, either. 😀 Okay, let’s say you can choose your own nickname, with an assurance that no one would ever mock you. Tell us your choice.

I guess I would go with one that’s already been given to me. After sharing an embarrassing episode in my life with a friend, her husband called me JJ for a while. I think it’s kind of cute and have actually used a variation of it for some of my online accounts. If I had to choose a completely new one, Ms Nobel Prize Winner works for me. 🙂

Ha-ha! That would be a really nice one. I’ll keep my fingers crossed for you. Here’s a fun one. If your book was turned into a movie who you choose to play your main characters?

Did you ever watch an old series (I think from the 90s) called I’ll Fly Away? I picture Sam Waterston-then-as Elliot. He’s too old, but at that age he would have been perfect. Now, in my dream cast, I guess I’d have to choose Jeffrey Dean Morgan. For Marcus, Matt Damon all the way. I think he’d be perfect for that role. Bruce Willis is a little too old but I can see him as Colby (I love that man so he’d have to have a place in the movie). Ian Sumerhalder would make a great Daniel. Beyond that, I’m not sure.

You had better start surfing the net and put together a pinterest storyboard for this book. Cast those characters! If you were to write yourself into your book what kind of character would you be?

If I were to write myself into Enza? I’d be the freaked out woman sucking down vitamins and herbs like candy….and trying to convince everyone I know to do the same.

Oh my gosh! You have me laughing up a storm, girl. Before we go, we’re dying to know – do you have anything new in the works?

I do, thanks for asking. I’ll be releasing the second installment in my Coach’s Boys series in May or June. I have two WIPs that are about half-finished, and need to write the fourth book by the end of the year (and the last by next spring). There have also been a few requests to write a sequel to Enza, so I’m tossing some ideas around. After that, I think there are seventeen projects on my ‘to-write’ list. So far… I think I’ll be busy for awhile.

Thank you so much for taking the time to answer all our questions, Kristy! It’s been great fun. Enza sounds like a true labor of love. Those always make the best books.

Now, pay attention readers! Kristy K. James has a special bonus for you. We will be giving away One paperback version and 3 Kindle versions of Enza to be determined from all those who comment on today’s interview. So don’t just stop and go or hit the “Like” button. Take the time to comment! But it doesn’t stop there! NOPE! Everyone commenting on the tour (that’s not just this post, but every post along the tour. Click here to see them all) will be entered in drawings for ten – $10 and two – $25 gift certificates to be done at the end of the tour (May 5th)! How awesome is that? So join in and comment folks. Comment here and then hop along the tour and comment everywhere for more chances to win.

Kristy K. James’ first goal in life was to work in law enforcement, until the night she called the police to check out a scary noise in her yard. Realizing that she might someday have to check out scary noises in other dark yards if she continued on that path, she turned to her other favorite love, writing. Since then, her days have been filled with being a mom and a reluctant zookeeper (7 pets), creating stories and looking for trouble in her kitchen.

79 thoughts on “A Bird named Enza and the Influenza”