A blood promise made centuries ago, believed to have been forgotten to time, returns with complications for fallen angel Charmeine and her charge to save humanity from a curse gone wrong and a resulting demon-ruled world.

My latest novel released today and I couldn’t be more thrilled! Under the guidance of the brilliant and amazingly talented Rebecca Hamilton, I created a paranormal dystopian world as a STANDALONE within a larger collection: The Cursed Angel Collection by Charmed Legacy.

With each new piece I find my writing skill and talent improves and with this particular piece I am immensely proud. 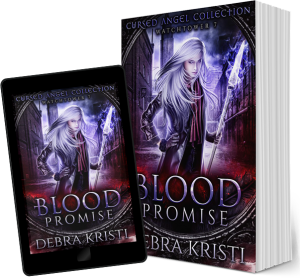 The angel of harmony is about to become a warrior of destruction.

It’s been sixty-seven years since a spell gone wrong devastated the planet. All that is left of humanity exists in the demon-ruled, sinking ruins of what was once New York and New Jersey― home to fallen angel Charmeine.

Now, by the grace of God, she has been given the chance to save the world and her angelic standing. All she needs do is work with a deplorable witch and condemn her fallen brother, the demon lord, to eternal imprisonment.

Charmaine would do anything to earn back her wings. But when she does, who will be there to save her humanity?

This fast-paced, action-packed, dystopian paranormal romance about a cursed world and a biblically entangled war between family loyalties and age-old love is ideal for fans of The Mortal Instruments and Supernatural.

Early reviews are loving this read and this week (only) Blood Promise: Watchtower 7 is only 99 cents! Hurry before the book returns to the regular $2.99 price!

About the Cursed Angel Collection:

Angels and Witches must join forces to overcome the Demons that have cursed the earth.

Many years ago, a demon inhabited a witch’s body to cast a spell to open all thirteen dimensions so that the demon spirits trapped there could be unleashed onto earth. But when the demons were released, the dimensions collided, creating rifts in the earth that re-divided the world into 13 continents, each with their own curse.

In each city, high and protected in the city’s Watchtower, the Demon Lord of that dimension resides. And so long as that Demon remains on earth, his curse will reign over the Circle where he resides. In an attempt to reverse the damage, 13 of the strongest angels were sent to earth to defeat the Demon Lords. However, their sacrifice came at a price: they would have to take on the curse of the circle they were sent to, and would be damned to earth until the curse was lifted.

Lifting the curse, however, means befriending a witch…which the angels believed to all be as evil as the demons themselves.

These are the stories of the Cursed Angel watchtowers.

Until next time, keep it real yet keep it magical!

You know what would tickle my dragon bone? Share a ‘like’ with me, join the Insiders’ Club, and/ or my reader’s club, and follow this blog! These things make me ecstatic! Let’s hang out!