A Bit of Crystia Backstory

(Takes place during summer break prior to Crystia’s Junior year) 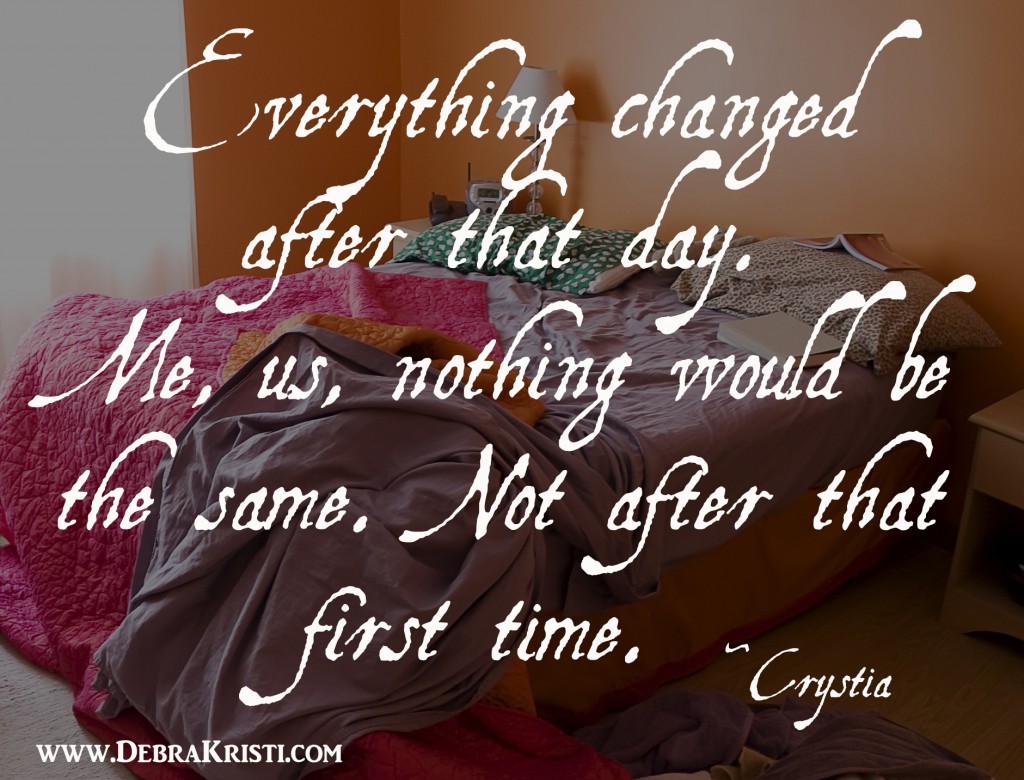 “Should I stay?” He lingers in the doorway, uncertainty in his posture. It’s obvious Chris wants to bolt. I don’t blame him. Things didn’t turn out as expected. And yet, he hovers.

“No. Just go. I’ll catch you later.” I sigh and let my gaze wander. “You can see yourself out, can’t you?” I wiggle into a more comfortable sitting position on the bed, pulling the covers tighter around my body.

“Yeah, sure.” He  tugs his gray Henley t-shirt over his head and disappears down the hall only to reappear a second later. “Crystia?”

My back stiffens like someone has shoved a rod up my spine. “What?” I try not to sound exasperated, but he really should be out the front door already.

“Was that okay? Are we okay?” His brow creases and worry sets deep in his dark brown eyes.

I bite my lip and contemplate my responce.

Chris runs his hand through his dirty blond hair, shifts his weight, and wanders his gaze over the scene, and my bed—the place where he claimed my virginity.

My shoulders relax. “Yeah, fine,” I say. I’ll see you tomorrow. At school.” I wait for him to go, but he continues to linger. “Goodbye, Chris,” I prompt.

His lips pull into a straight line. “Later.” He turns away, glances over his shoulder at me, and then disappears from the open doorway.

His footsteps retreat down the hall, across the house, and out the side door. My muscles relax. Finally. He’s gone. Taking our relationship to the next level wasn’t what I thought it would be like. I mean, yeah, I’ve heard it said that the first time never is all that. Except, I suspect the lack of satisfaction goes deeper than the experience being our first. In those intimate moments, I discovered I wasn’t really into him…not like I thought I would be—like I should be.

I lacked desire. Interest, even. It was as if I acted out of some sort of obligation, like I thought I owed it to him after keeping him tied up in a relationship for so long.

Now, I question if I like him anymore. Or if I even like boys at all. I feel contaminated—so grossed out. And I can’t stop thinking about someone else…the girl who helped me get the job at the Feline Preservation Center.

Yanking my robe from the hook on my bedroom door, I make a beeline for the bathroom and a hot shower. I’m in serious need of washing away all man stank. The trash and temperature of the water turns my skin crimson. The steam clears my mind of any thoughts of Chris.

I want to remain beneath the running water forever, or at least, until the heat turns me into a flimsy noodle. But my sister Ana will eventually return home. No doubt, with her friend Ryland in tow. And I don’t want to explain myself to either one of them.

I smile inwardly at the thought of Ryland. Ana should totally stop fooling herself and jump him already. He’s hot.

When my skin begins to prune, I deem myself clean. I step free of the tub, into the steam cloud trapped within the bathroom, and stare at my reflection in the mirror. Do I look older now that I’m no longer a virgin ? My head tilts left then right. My bleached blonde hair drapes down the sides of my face in a wet mess. My skin, my lack of curves…everything…remains unchanged.

I lean toward the mirror and examine my eyes. For a brief moment, I think my eyes are favoring one color over the other. moment later, I sigh. No such luck.

My eyes are still a mishmosh of green, blue, and brown. Oh well.  With a quick blink, my flash of excitement melts back into realism. I grab my contact lenses from the top shelf of the medicine cabinet and, with a little modern magic, my eyes appear as a solitary color.

Clean and dry, I return to my room and throw on some clothes, snap my crystal wristband into place. My phone rings and I startle. The crystal of my wristband glows for a split second. Odd. I glance from my crystal wristband, in search of my ringing phone. I spot it sitting on the dresser. My sister’s name displays on the screen and my crystal dully throbs with silver light. Could my connection with my sister be causing  the unusual light within my crystal? I wonder.

The phone rings again and my gaze wanders to the time. My heart slams into high gear. I need to get moving. I’m running late for my shift at the Feline Preservation Center. I may not be an official employee, but I still don’t want to be late.

On the third ring  I hit the phone’s  ignore button.  A part of me yearns  to  talk to Ana  about what transpired between Chris and me,  but the other part of me fears she wouldn’t be able to relate.  After all, she hasn’t had a successful date in ages. She hides behind the mysterious man in her dreams and Ryland, the guy she swears is just a friend.

Ana means well, but she is probably the farthest thing I could find from solid counsel in the area of relationships. Besides, I don’t have the time for the lengthy conversation that my first time would undoubtedly become.

I slip on my tennis shoes, grab the car keys, and head for the door. I’m expected at the Feline Preservation Center, which means I have a date with a Caesar, a beautiful white Siberian tiger. And, as it so turns out, we have a lot to talk about.