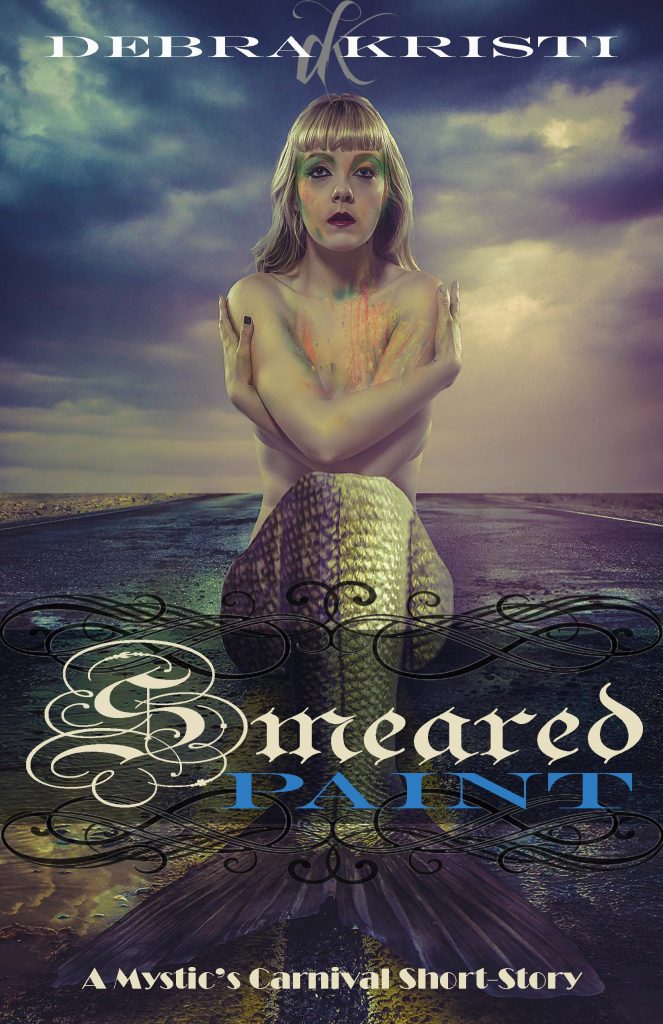 The tent flap brushed aside and the lights flickered on. The illumination was dim―just enough to prevent patrons from tripping or walking into a supporting pole. It was Bart’s fifth visit this week, and it was only Monday. He probably didn’t even need the light. With the number of times he came, there was a good chance he could maneuver the tent in the dark.

He rested his cheek against the slick chill of the glass, pressed his ear against its surface. the smile that fanned across his face told of everything he wasn’t saying―the smile and the number of times he kept returning. Hand fanned flat against the reflecting surface he hummed a melody, sang to the captor behind the glass, the one he continually came back to see time and time again. In a deep, raspy voice he sang of sins, punishment, and letting love in.

A weight seeped through her shoulders, dropped to her gut. She didn’t feel for Bart as he did for her. Still, he came when no one else did, and that was something. She didn’t dislike him. In fact, she cared enough to try and protect his heart―not break it. She fished her fingers through the cage at the top of the glass and reached out for a connection. Any connection at all. Without hesitation, he laced his fingers with hers. With the rush of a tsunami, his warmth spread through her palm, then out along her arm. The vitality of human warmth never ceased to surprise her. Yet she didn’t jerk or pull away. Contact with another living, breathing individual was something she craved. Like food and water, it was a necessity.

Lonely, she was never allowed to leave her oddities tent. Patrons rarely spoke to her, except in jest or worse, and the talker for her exhibit almost never stepped inside to chat. Maybe he found her disgusting. Maybe he feared her. Maybe he didn’t have a mind for conversation after a day of high-speed barking, moving customers into her tent. Whichever it was, it left her dismal, deserted, and deeply depressed.

“Bart?” Her voice swept around him in a sing-songy tune.

He looked up, rubbing his cheek across the glass, and smearing his white face paint in a long drawn-out line. When he gazed upon her there was no denying the desire burning within him.

She bit her lip and held back a snicker. He wore a red, rubber ball on his nose and that made him silly not serious business, but she was going to try. “I could grant you a wish, you know.” She batted her eyes. “Almost any wish at all…if you got me out of here. Saw me safely to freedom.” She attempted the sweetest do-it-for-me smile she could muster and leaned into the cage separating them.

Bart wavered, shook his head. He pulled the bright curly wig from his head and held it between his hands before dropping it in favor of pressing closer to her, to the glass and cage keeping them apart. The big, red nose bumped on the side of a bar, beeping as it did.

She giggled and Bart’s face fell, the red ball disappearing with one quick swipe. It bounced onto the dirt floor of the tent. She glanced at it, then away.

“The thing is, Marella,” Using an old rag, his hastily wiped the paint from his face. In seconds the clown was gone and a mid-aged man stood before her. He was tall and strong with thinning hair and a stout nose, but he had an air about him that whispered overtaxed and discouraged. He took a deep breath and continued. “There is only one thing I want for my wish.” He looked her intently in the eyes. “That is to spend the rest of my days with you―together as one.”

Marella pulled, attempting to let her fingers slip and slid away from his, he held tight. “There is no future as long as I am here, at the carnival. They will always treat me like a sideshow act. An oddity to cash in on.”

“Then I shall take you away from all this. Far, far away. And we can be wed.” His grip around her wrist clamped like a shackle, and he yanked her forward, his other arm snaking through the cage, gripping at her shoulder, then the back of her head, pressing and pulling. His lips puckered. Through the minimal space of the bars, he pressed their lips together in a fevered kiss.

Ice water rushed through Marella’s veins. She hissed. Slammed her tail against the side of the tank. It connected with the force of a whale’s thrust―stronger even. Blood laced Bart’s lip where she’d bitten him, she thrust away sending a wave a water cascading up and out of her cage.

Water fell onto the muddy floor.

And water pushed the red ball nose into the far tent wall.

“There is only doom and destruction down that path, Bart. I’ve told you before.” She looked to the rippling reflections on the water’s surface. “You cannot make a mermaid love you. Do not even try.” She dove under the water. Let the strum and pulse of its motion fill her. Through the seaweed flow of her hair, she watched Bart leave―a dismal, defeated man. Turning away from the tent galley, she felt the edge of her teeth with her finger. Her sharp upper teeth were retracting, the upset subsiding. If only she could bring herself to love him, by Mount Olympus and Poseidon, she would.

The tent lights did not dim and the air remained charged with living warmth. Marella kept to what safety the depth of the water provided, yet her fingers brushed the tank glass detecting the vibrations in the room. Her gaze narrowed in on a dark shadow at the back of the curtain tent. A virile young man stepped forth. His unruly hair swept to the side and dropped just above the shoulder in a lush shade of chestnut. His eyes were the color of the sea. He walked with confidence in his approach and flipped a switchblade in his hand.

“I wouldn’t worry about Bart.” He nodded in the direction the sad clown had left minutes ago. “He’ll deal, eventually.” The guy paused. “I just don’t see you with a clown. Not a shimmering sea gem like yourself.” He pointed to the side of his lip. “You have a little white paint right―”

Marella brushed at her lips, her cheek, smearing white and red paint across her hand. Staring at the blend of color a twinge of guilt dropped in her belly. Poor Bart. Chalky tasting Bart. She looked back to the man standing before her exhibit tank.

The blade in his hand froze and with the quick moves of a cheetah he took to the bars, the blade etching and scratching at the base. Marella shrank back, her heart pounding faster than a motor boat’s engine.

The bars swung open. Marella leaped at the clear exit―into his waiting arms.

“I’ve missed you so much! Where have you been, Noah?” She wrapped her arms around him, pressing his heat into her skin, her scales, her soul.

He pulled her back, brushed her hair from her face, ran his thumb along her cheek. “I’m sorry. I’ve found you now and that’s all that matters. Never again shall we be apart. Besides, who else is going to keep clown paint off your face?”

“You still have a little right…about…there.” His lips caressed hers.

The sea sang to her in his eyes, the human world called to her through his touch. But it was his kiss―soft, supple, and strong with sentiment and suffering―that pulled her to him time and time again. A wave of emotion crashed over her, enveloped her. Like a jug of water dumped into the ocean, there was no telling where she ended and he began. She was now and forevermore his siren.

Marella the mermaid loved no other but Noah.

Explore more of the Mystic’s Carnival world with Moorigad, the completed dragon-shifter series. Start reading today for FREE with Kindle Unlimited or grab the three-book bundle for a deal!  START READING NOW!

Born and raised a Southern California girl, Debra Kristi still resides in the sunny state with her husband, two kids, and four schizophrenic cats. Unlike the characters she often writes, Debra is not immortal and her only superpower is letting the dishes and laundry pile up. When not writing, she is usually creating memories with her family, geeking out to sci-fi and fantasy television, and tossing out movie quotes.